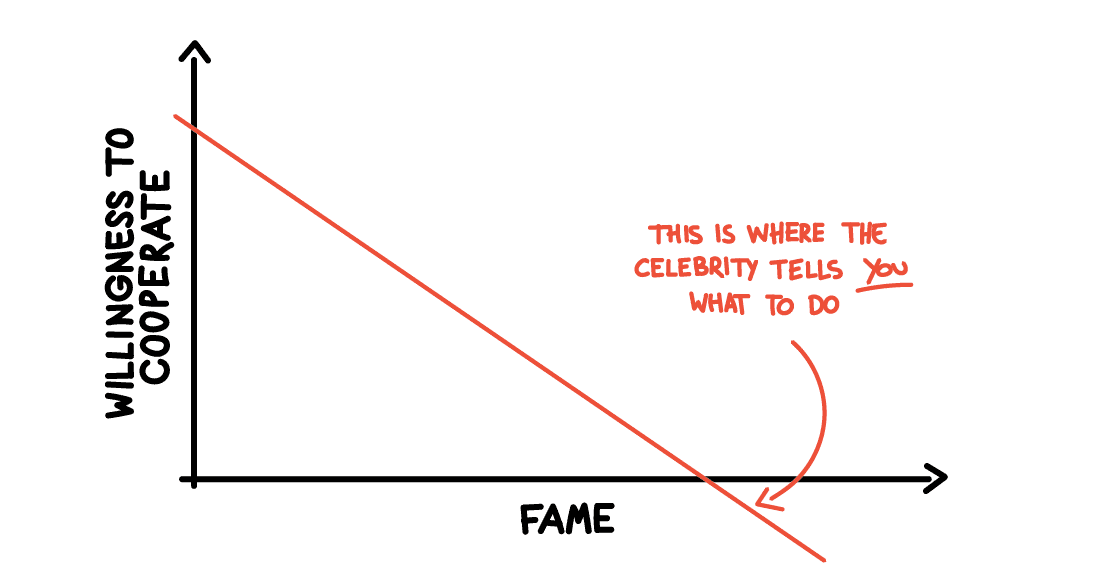 Working with celebrities: Willingness to Cooperate VS Fame

Here's yet another for the series Graphs I Think are Correct.

I've moved to LA in December 2013. Before then, I had only one experience working with celebrities. And that was never really a big part of any campaign idea. But this is Hollywood, baby! This city lives and breathes pop culture and that feeling has seeped into the ad industry.

Working with celebrities makes sense sometimes. It's an easy way to say a lot in little time (and achieve a Brain Popcorn Effect), meaning we can instantly attribute to a brand the traits of someone we can hire. For instance, a gym targeting a young crowd could have Dwayne "The Rock" Johnson star in their commercial. The more famous the personality, the greater potential for Brain Popcorn Effect.

That comes at a price, though. Apart from famous celebrities being expensive to hire, they have their own images to protect. That's their biggest asset. They are a brand themselves, and that may get in the way of your creative freedom.

The best thing to do is to find a celebrity that fits the brand and the message naturally, so there's not a lot of friction between the celebrity's image and the brand's. The last thing you want to have is someone you hired telling you to re-write the script in the set. That happens more often than you can imagine.

Have you ever gotten in trouble working with celebrities? More importantly, do you agree with the graph? Leave me a comment and share the article.