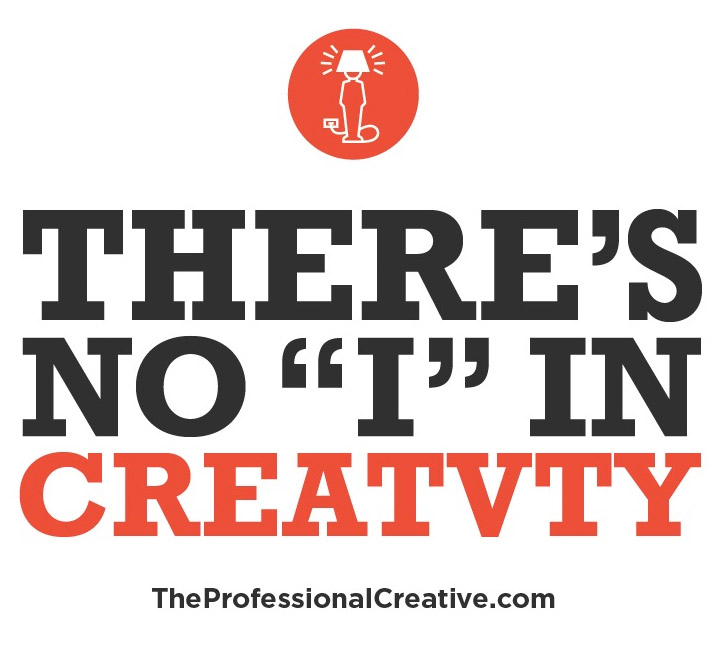 There's no reason to deny it: creation is a selfish act. We hear the stories about TV artists being a bit too touchy about criticism or the singer who throws a fit because things aren't exactly the way he wants. Anyone who's ever created something has felt at least a little bit like that. Doesn't matter if it's a company, a marketing plan or even a power-point presentation. When it's your idea, it's personal.

We know that great breakthroughs in creativity come from environments that allow creative people to exchange ideas. This is the whole basis of Steven Johnson's research – you can find out more about it in this great video or watch his TED talk. An ambient where ideas can be exchanged is a breeding ground for innovation and we definitely need to share our ideas with our peers in early stages to allow for cross-pollination and improvement. That's not the same as saying we should come up with ideas in groups.

There's a selfishness to creation. Sir Joh Hegarty, legendary ad man (he's the "H" in BBH, one of the largest advertising networks in the world) defines creativity as "an expression of self". Some of the creative people I most admire have often said something similar. One of them is Steve Wozniak, co-founder of Apple. In his book, iWoz, he says:

"I don’t believe anything really revolutionary has ever been invented by committee… I’m going to give you some advice that might be hard to take. That advice is: Work alone… Not on a committee. Not on a team."

As Maria Popova notes, this statement needs to be taken with a pinch of salt. Woz himself was inserted in one of the most creative times and environment for computer sciences - Silicon Valley in the 70's. He did indeed work hours and hours on his own, but he would ultimately influence and be influenced by other ideas. As Joh Hunt, another legendary ad man, notes in his amazing book "The Art of the Idea":

"Great ideas often come from quiet people who take stimuli from their surroundings, but work in solitude with their minds". 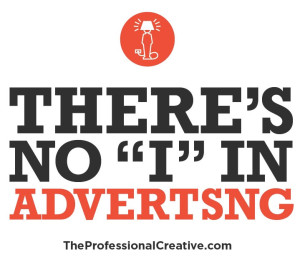 "Creation by committee" has become a popular expression to signify the lack of originality of things that have accepted input from too many people. To many minds creating together lead to a boring, unoriginal, status-quo-conforming idea. Is this creativity at all? Working completely on your own, in the other hand, is not the most efficient way of creating innovative ideas.

This is my preferred way of working creatively:

1. Have ideas on your own

No one can follow the speed and path of your thought process from outside. Having ideas – at least at first – is a very personal experience. When the ideas come, look for the holes and flaws in them and try to fix it yourself.

No idea is going to come out of our heads perfect. The earlier we learn that, the better. But this part is usually sensitive. You're sharing something personal. Share your ideas first with people you can trust. In advertising, this would be the moment when you first share your idea with a member of your creative team – your peer. If you work in a team, this is where the idea stops being yours and becomes the team's.

3. Evolve your idea as a team

Every creative person has a "diva" inside of them, because it can be tough to share ownership of an idea or take feedback from others – even if it's going to improve the idea. Here's a good lesson from the ad world: we have learned no to be over-attached to our ideas. We have ideas every day, and everyday ideas get changed, or disfigured, or killed. The best way to be objective is to try and judge our ideas as if it was someone else's.

At this point you should be satisfied with your idea. But even though you might no see how, there's still space to make it better. Talk about it with people whose opinion you respect. Or with people who might give a different perspective. You'll hear comments and suggestion, both good and bad. Take the positive comments and the useful suggestion, ignore the rest.

Making an idea happen might just be the hardest part, because we have to change gears radically. Whereas before we had to be unattached, now we have to fully believe our idea and back it up with everything we have. In a previous post I told the story of George de Mestral and how he invented Velcro. What I left out is that it took him more than 10 years to make a viable, mass produced product after he had the idea. For me, making sure I have a great idea before I set out to execute it is very important, because we need to be confident in the execution phase.

Congrats! You brought your idea to life and now you can call yourself creative. From here on, if it's possible for you to keep evolving your idea, do so. Perfection is the elusive objective of creativity, that's why creative work is never finished, only abandoned.

The objective is to make the idea as good as it can possibly be, not as good as you would be able to make it on your own.

Although an idea is very personal, we can make it much better if, after it's conception, we allow it to be influenced by others. If you want to create something truly special you have to give up the the right to say you did it by yourself.

How is your creative process? Do you reserve time to think on your own? Let's us know in the comments. Share this article if you liked it.