In a previous post I have mentioned the Brain Popcorn Effect and quickly defined it as "what happens when you say or show something that taps into your audience's pre-existing knowledge and makes your message bigger". In this article I'll go into more detail about it.

Advertising has a very specific way of communicating – and we can learn a lot from it. The lessons go beyond advertising.

Throughout the years, advertising has sought to convey specific messages to the audience. Advertisers dealt with payed media space and limited time slots (i.e. 30s commercials). Because of that, and in the name of effectiveness, the ad industry developed a talent to squish a lot of information into a small space. We ended up being quite good at it. Advertising copywriters spend most of their time trying to use the least words possible to convey a message, and art directors are the most happy when they can convey a message with no words at all.

"Sorry for the long email. If I had more time, it would have been shorter."

- Every copywriter in advertising

That behaviour has a reason. It's all about simplifying (because the message usually needs to be delivered in a small space of time) and about creating a Brain Popcorn Effect (because we need to leverage existing information in the audience's mind to complete the message). That means we can deliver a bigger message in a simpler way, in a smaller form.

All communication takes the audience from the KNOWN to the UNKNOWN. Consider that for a second: not just advertisers, but teachers, presenters and anyone with a message will use metaphors, comparisons and examples to explain new information to an audience. They will reference something the audience already knows to make them understand new information. The ad industry, though, has taken that to the level of an art, where we condense the new information and the references to existing information into the smallest space with maximum effectiveness. We might even throw in a little joke to help it stick. Here are a couple of my favorite examples:

The famous headline "Think Small" for the VW Beetle ad in 1959 carried much more than it's literal sense. In the USA, that was the time to "think big", and that's what everyone talked about. So what the 2-word headline actually said was "We know you're supposed to think big. But thinking big doesn't mean big in size. Big cars can be a hinderance in the city. Having a small car is actually thinking big". The kernel of a headline expanded into the popcorn of a greater idea. 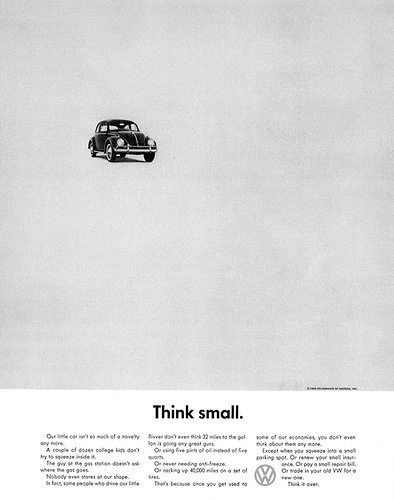 Apple created a beautifully shot video for the 30th anniversary of the Mac. It's a feel-good montage of inspiring scenes from around the world. At the end of the 1:30min video, a simple statement appears on the screen "Shot in one day with the iPhone 5". That small statement is the kernel - the sparker of a Brain Popcorn Effect. If you think of the expanded message (the popcorn) it is something like this: "Forget everything you thought a mobile device could do. The iPhone empowers you to create anything you imagine in the highest level of quality. We're breaking the technology barrier and allowing everyone to give life to their imagination - the impossible is now possible."

Here's what's important to note: If apple just came out and plastered the "expanded message" in every billboard on the planet, the message wouldn't be as powerful. Millions of people would read it and understand it. But it wouldn't stay.

The Brain Popcorn Effect is not just about making things shorter to save time and space. The beautiful thing about saying it in a simple way and letting an idea expand in one's mind is that it causes emotion. The expansion of the idea that takes place inside our head is what gives us goosebumps and makes us feel something. That's what makes us remember.

Brain Popcorns are everywhere, not just in advertising. They are in books, presentation, speeches. Comedians use it a lot. We can use it in conversations and everyday emails. It adds to our communication and makes it more interesting, because we're adding emotion to it.

If you want to create a Brain Popcorn Effect on you audience and get them to remember your message, you need to make sure you have a few things:

Do you know any examples that illustrates the Bran Popcorn Effect well? Leave a link in the comments. If you liked the post, go ahead and share on Facebook or Twitter. Let's start a discussion.

[…] one. The power analogies have, as Pollack describes, is the same power I call the “brain popcorn effect“. Once a new bit of information is absorbed, our brain will try to connect it to concepts it […]