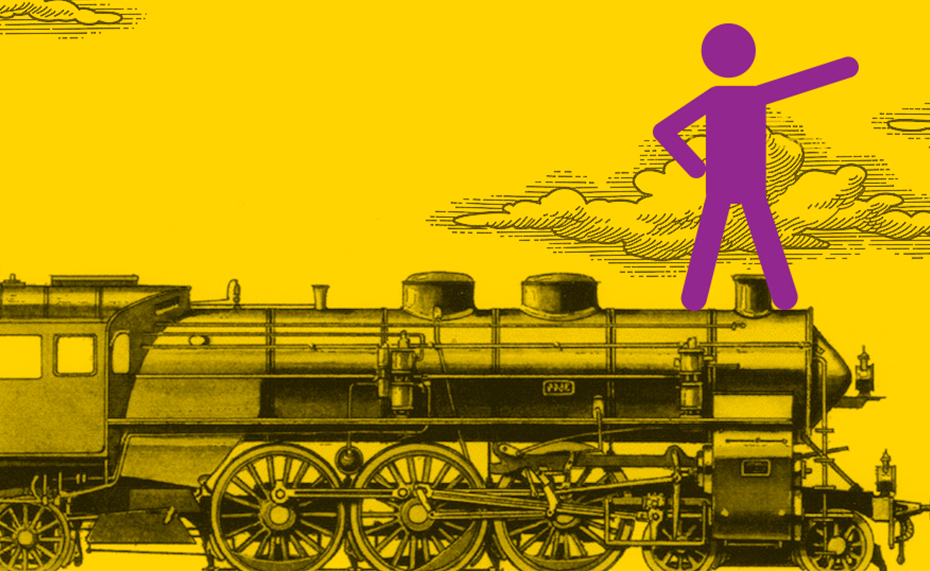 Get on the creativity train: mental models to keep you moving though the creative process

Creativity can be scary. If it's scary for professional creatives, it's specially so for everyone else. That's because we don't know what lies at the other end. It's a mystery. When you start creating, you don't what ideas we are going to have.

It can be scary, but it can also be exciting. Like riding the space mountain, you know? It's all about the mindset – and that's something you can control.

Creative people usually have a "mental model" that will help them go through the creative process without faltering. By imagining this uncertain process as familiar pictures, they are able to keep their wits about them when the pressures of not knowing what the final result will be pokes at their confidence.

A mental model is a belief we hold to help us get to the ideas we are looking for. And it's gotta be a belief – it's all about faith. Faith in the creative process and faith in your own creative abilities.

Pete Docter on the left, Ed Catmull on the right. John Lasseter and Alan Horn between them.

In the book Creativity Inc., which has become the bible for creative management, Ed Catmull describes the mental models of several Pixar directors and other creatives. George Lucas liked to imagine his company as a caravan of wagons heading west, into the exciting unknown. Andre Stanton, director a films like Wall-E and Finding Nemo, compares his creative leadership role to that of a captain on a ship, where he needs to set course and get moving even if he's not sure that's the right direction to go. Bob Peterson, a Pixar screenwriter who wrote UP and other Pixar films, compares his creative work to an archeological dig, where you slowly brush the dust away to reveal bits and pieces of a story that only later will be connected and make sense as a whole.

My favorite mental model, though, is Pete Docter's. Pete Docter created and directed Inside Out and other Pixar classics:

"Pete Docter compares directing to running through a long tunnel having no idea how long it will last but hoping the he will eventually come out, intact, at the other end. 'There's a really scary point in the middle where it's just dark,' he says. 'There's no light from where you came in and there's no light at the other end; all you can do is keep going. And then you see a little light and then a little more light, and then, suddenly, you're out in the bright sun."

There's so much I like about this mental model. It foresees the discomfort of the dark, but also implies the certainty of a way out on the other side. Also, this model's key point is very important for creativity: you have to keep moving.

I add my own spin to this model. Pete's model is the tunnel – maybe he imagines himself running through it. I like to imagine myself driving a train through that tunnel. The train of creativity. This is why I compare creativity to a train:

The faster you're moving, the more unstoppable you are. This is creative momentum. When you get in a flow state (a.k.a. "in the zone") you can churn out many ideas in a small amount of time. Sometimes it takes hours to get into that place, sometimes weeks.

Inversely,If you slow down the train, or stop it, you'll have a hard time getting it moving fast again. That means we have to remove the roadblocks that slow down creativity.

Roadblocks on the creative process we must clear

The limitations given by a well framed problem are important to unleash creativity. If we're spreading our creative effort too thin, the train is not gonna get traction. The best way to formulate your problem is in the form of a question, which should help your brain get into gear. But not all questions are created the same. In this earlier article I give some insight into how to formulate questions that jump-start your creativity.

Specially when generating ideas, a "no" can turn you off and slow you down. We've all been in a brainstorm where everyone fell silent after the boss or someone else said they didn't like an idea, or criticized it. The antidote to the "no" is the "yes, and...", the "what else?", the "how else?" and the "what if...". Instead of saying "no", say one of those, or just don't speak at that point and let the other people develop the thought.

The other major roadblock to creativity, maybe the biggest one, is self-judgement. Like I've written in this previous article, if you don't believe in your creative ability, you'll kill your ideas before they can see the light of day. These roadblocks will keep you in that scary dark place in the middle of the tunnel if you don't address them.

So imagine a the best case scenario: Your train is loaded with knowledge, chugging at high-speed, ready to go into the creative process tunnel. You get in, full speed ahead. It’s dark, you can’t see a yard ahead of you, but you keep feeding the furnace. You avoid negativity and defer judgement – you’re in the zone and you feel free speeding in the dark. By that time, you won't stress about finding the light on the other side. Yet, when you least expect it, there it is. You keep at it and you chug along. Then your face basks in sunlight. You enjoy the warmth on the skin.

The world on the other side of the tunnel is new to you. You didn’t know you were coming here. You’ve never seen it, yet it feels you couldn’t have gone anywhere else. That’s what it feels like to be creative.

The worst case scenario is not so bad

In the worst case scenario, the trains goes slow and the tunnel is longer. But you know what? If you keep moving, you'll eventually get to the other side. Because that's the thing about tunnels: they can be long, they can be dark and windy; but every tunnel has a way in and a way out. So, all you have to do is keep moving.